MS Gathering by the River Burgundy by Barbara Egan 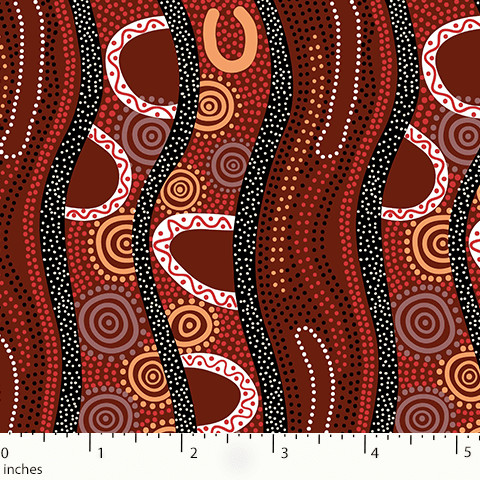 Actual USPS Priority Mail shipping charges will be calculated prior to shipping and can be less than what appears. Within the state of Alaska we use Regional Rate Boxes or local airline carriers.  Notice to Alaska Residents:  If you are shopping from outside of Juneau sales tax will be removed prior to credit card being charged.  Thank you for choosing RainTree Quilting.

Aboriginal people are regarded as the land owners of Australia. Their respect towards land is considered to be more than a place. They respect every mountain, river, waterhole, tree, animal etc. and they consider them as a part of their living. Aboriginal ancestors are believed to be the creators of all the land and objects that are essential in day-to-day's life.Traditional Aboriginal laws of food hunting involves bush food, sea food, wild life hunting etc. However, they never do anything to hoard or spoil the nature of their environment. They honour their ancestral lands and the teachings from those ancestors. In many occasions, Aboriginal people gather near the river for various ceremonial rituals, where they perform dances, rock-art, story-telling etc.Barbara Egan comes from Robinvale region of Victoria. She grew on the Murray River in Robinvale. With her connection towards her land of Robinvale and the Murray River, she would never move out from there. Her dreaming's mainly involve River Dreaming, Emu Bush etc